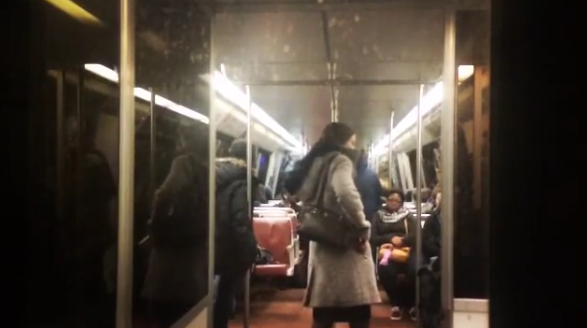 Once More, With Feeling

It’s been almost a year of pretending I don’t really like to blog, and the voice atrophies.

I mean, I still write. I write for work and I write for the community. I write in my journal, mostly sappy and feeling-ey entries where I let my egglike soul run around raw, goopy and disgusting. I like reading my old entries a fair bit, actually: it’s like speaking with the person I am when I’m not hiding behind the steelplate of sarcasm that I don’t even take off in intimate moments. It’s kind of annoying.

Recently I got a reality check on just how much I am *not* actually journaling. I went through half a notebook this year, give or take a crappy doodle. Granted, it’s one of those enormous notebooks they sell at art stores, and my penmanship is small and garbled; but Instagram FOMOed me temporarily into a lather when an acquaintance posted a photo of many journals filled out over the year, making me realize that either some people are wordy af or I’ve become a lot more economical in my writing. I think the latter is true.

I tweet –a lot– and tweets take a lot of energy for how brief they are. Sometimes I find myself drafting what I think is a clever tweet a few times over, only to leave its ghost in the drafts folder, haunting me. A reminder that I am not a writer– not an essayist, not a novelist, not a journalist either. What I am is a collection of quips. Say something clever! I can imagine grown adults with chubby child hands or slender hands that photograph perfectly for a living, all these hands just clapping. They beg for quick quips and then they go about their day, seeking… what? Substance, perhaps. Or just something else. A reader cannot subsist on Tweets alone.

Amendment: Apparently, some people read actual books– or so they say– all the way through. (!!!) Many readers can subsist on tweets alone, without even clicking on the articles. (“Oh, so that’s what the hyperlink is for!”) Some can even subsist on a steady diet of bland People Magazine articles. Some people cannot read. Finally, some people only communicate via emoji. I like these people best.

I cannot please everyone, but I can sure as heckfire please myself.

It’s not that I feel tweets are trivial, because they are not. Expressing yourself in a limited medium blesses you with forced brevity. Life is brief, but it conveys so much. Kids understand the “parent” look: that flash of the eyes that stuns them into (brief, ephemeral) understanding, and tells them to put down the cookie or stop asking the lady how old she is. It’s also possible to glean, with a different look, how much you hurt someone you have been stringing along as a friend for years.

So, if so much can be conveyed with just a look –and we reward handsomely those who are generally quite good at mute gestures with things like Oscars and swag bags and modeling contracts, by the by– a few well-crafted words can be deadly.  Speaking of Oscars: My favorite, Mr. Wilde, was a master at slaying people with his witticisms. He uttered so many and so regularly, I think most people can quote him or misquote him eloquently and yet no one can quote one single line from The Ballad of Reading Gaol. Or, I dunno– maybe you can. Show-off.

Yes. I want to be like Oscar Wilde, minus the “piss off rich friends, land in jail” part. A girl’s gotta have goals. (Damn. I guess that means I’ve also committed to becoming a playwright. *Recalibrating*)

Tweeting is life. It is, as a Twitter friend recently quipped himself, “turning to face the strange.” (Thank you, David Bowie.) And as such, I cannot imagine a better medium to express It, what ever It is. Sadness and joy and the ennui of the moment all reside in its Eridanus waters. Obviously, Eridanus because it could be, like, a real river; but it can also be a mythological river that runs through hell (especially during fraught events); or it can be a river of stars, because stars tweet a lot and they pick fights, doncha know.

I like to think of the fish, Pisces, swimming upstream in the river constellation (because apparently they are salmon). I see the water bearer collecting the water to take to town –busybody that he is, but always detached– and I see the goat overlooking the river: quiet, distant and ambitious, separate from the ram and the bull. This is what I would call a quick astrological musing. It’s interesting how, if you think long enough about anything, the symbols just pop out at you. Or maybe that’s just hallucinations– from boredom, some might say.

There is an epiphany in this post somewhere. I say this to soothe you, if you’re getting antsy. The epiphany is this: when you’re on the right track, you don’t need to ask. Things just flow. They happen and you feel good about them. You feel so good about them, you stop questioning the process and instead move on to the next thing, whatever that may be. And that process finds you and it follows you, instead of you chasing after a nebulous maybe. Sometimes, that process is hidden in a stream of nonsense. Sometimes, it’s hidden in a worthy avocation. Sometimes, the worthy avocation is what you make of it. The epiphany is there is no epiphany: just a lot of upstream swimming only to go back downstream and do it all over again. What changes? The belief that what you’re doing is being read or felt or devoured by someone, somewhere, who suddenly feels that spark too.

Once more, then, to blogging. To writing. To quipping. And to pleasing myself as I wind my way down this river.

11 Jan This entry was published on January 11, 2016 at 2:14 pm. It’s filed under Inner Lotus Blooms, Soapboxing and tagged craft, oscar wilde, tweeting, twitter. Bookmark the permalink. Follow any comments here with the RSS feed for this post.