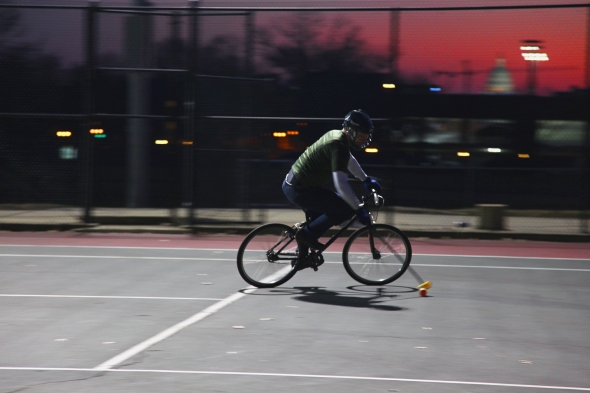 Close, but not too close– although that did happen, and I did scream.

Robert Capa, the famous photojournalist and rogueish risk-taker, has been quoted as saying, “If your picture isn’t good enough, you’re not close enough.”

I fear for my equipment. Is that bad? Maybe all that means is that I won’t ever be taking photographs of soldiers in the actual, physical process of dying.

Of course, Capa was almost as grandiloquent and boastful as he was an actual and excellent portraitist. Also, it appears that he may have staged that photograph. I am pretty sure that, as far as photojournalism and ethics are concerned, that is bad. But hey– how else are you going to protect your standing as a Great Photojournalist?

A quote that is far more to my liking and aspirations, and which was helpfully supplied by an excellent friend and fellow photographer is this one by Arthur “Weegee” Fellig: “f8 and be there.”

The fact is that I was standing there, at Gallaudet University’s tennis courts, watching those awesome Bike Polo guys riding their bikes and swinging their homemade mallets, whizzing by and taking cracks at a tiny wiffleball. I was there, in the cold, hoping that I didn’t get knocked in the teeth and kind of wishing I’d thought of bringing a) more layers, b) some Pabst Blue Ribbon and c) a bike, kind of (I have a very complicated relationship with bikes).

And you weren’t there– which is not bad, because maybe you were doing something else: the odds are high that you were. That’s okay. I am glad I was there, and that I can tell you that I’m pretty sure that move is called a shuffle because Mike (that’s the guy on the bike) is hitting the ball with the side of the mallet. I’m glad it wasn’t you, because maybe you wouldn’t have taken a picture. (Alternately, maybe you would have taken a different picture and that is okay too. Maybe your picture would have been even more amazing.)

I was there. I was happy (if a little cold). And this is my photograph. I want to be there –wherever “there” happens to be– again.

And today is the day I know, for certain, that being there, being present, and being truthful is far more important than the smoke and mirrors of self-aggrandizement.

It’s important just to be. And be there.

(f8 probably helps, too, although it all depends on your lighting conditions. You should probably pack a flash and extra batteries, at any rate.)

Older: Looks Can’t Kill, But Tentacles Can
Newer: On Halloween and Hospitality

3 thoughts on “Being There”